In , as the war in Bosnia was accelerating with dangerous momentum, the human rights group Helsinki Watch published a report documenting systematic executions, expulsions and indiscriminate shelling attacks. The atrocities were on an immense scale, and it was widely feared that genocide was being perpetrated. But Aryeh Neier, then executive director of Helsinki Watch, was reluctant to campaign for military intervention.

Yet we could also see that the atrocities would not be stopped by any other means. What we ended up with was a kind of tortured compromise. Hegel defined a tragedy as a conflict between two rights, and humanitarian intervention fits the definition. The debate seems to exist in a moral universe of tragic choices: hold fast to the traditional norms of non-interference and sovereign state equality, or recognise a legal capacity to intervene when human rights are being extinguished or threatened? The legal context involves equally tragic choices. If we accept the existence of a legal doctrine of intervention, in an attempt to bring legality into line with our moral aspirations, is law incurably compromised by serving at the elbow of state power?

In the current international climate, in which states must confront shadowy trans-border networks forging alliances with rogue nations, debating the merits of humanitarian intervention seems to lack urgency.

That issues of international humanitarian law, intervention and terrorism are increasingly linked only underscores the need to comprehend the legal dilemmas involved in the use of force. The issues raised in the debate over humanitarian intervention - the legal scope of the use of force, the presence of values in foreign policy, the legitimacy of multilateral institutions and the dangers of a new liberal imperialism - remain salient in the new international atmosphere.

The fine essays collected in the volume under review [6] are by international lawyers, philosophers and political scientists, and, although the book is organised in distinct sections that treat separate aspects of the intervention dilemma, all the contributors are alive to the wider context of the debate.

Whether seen as right, responsibility or missionary enterprise, the merits of intervention are commonly framed within a wider debate about the putative conflict between human rights and state sovereignty.


Nevertheless, Article 2 4 remains international law; it is a peremptory norm, one from which no derogation is permitted. Proponents of intervention have a double task: both justifying the legality of a doctrine of intervention, and exposing the antiphonal pronouncements of governments pursuing illicit motives behind a shroud of humanitarian rhetoric. But if we take a step back, it is clear that the debate amongst international lawyers is really an argument about the rule of law itself: about its scope in international affairs, the manner in which it should be interpreted, and the goals it should seek in regulating state behaviour.

This discussion can be broken down into a number of dualisms, ably documented in J. These scholars generally see the rule of law as the embodiment of an international theory of justice. A new normative international order is imminent, and international law must serve as its midwife. If state practice does not reflect any evidence of a developing right to intervene so as to bring about this utopia, well, so much the worse for state practice. He appears to assert both interchangeably. As Rousseau famously noted, sometimes citizens must be forced to be free.

The Moral and Strategic Failures of Humanitarian Interventions

But the pages of history abound with instances of governments waging war to edify citizens marooned on unenlightened shores, the loftiness of ethical ambition matched only by imperial appetite. Bush, in Panama. The formalities of legal process are dismissed in favour of the urgent teleology of the global liberal Arcadia - a cosmopolis, however, curiously free from political engagement.

The claims of self-defence put by India and Vietnam, dubious and legally untenable, were met with incredulity and condemnation by the international community, and regarded as a clear breach of UN Charter principles. The lack of any opinio juris - any conviction by the states involved that they were acting as required by law or in accordance with a rule - and the response to these acts by the international community, belies any claim that a right of humanitarian intervention can be found in customary international law.

For interventionists, Kosovo appears as some kind of watershed, installing ethics at the fountainhead of a new international legal paradigm. As Jane Stromseth suggests:. Specific interventions will hold value as precedents for an emerging norm of humanitarian intervention as opposed to being simply violations or excusable breaches to the extent that states explain and justify their actions in ways that contribute to broad acceptance of their legality. If states decline to provide such justifications, we may remain in the world of excusable breaches for a longer time rather than moving towards a developing consensus on a new norm regarding humanitarian intervention.

Rather than a crystallisation of state justification into a new customary right, Kosovo provides the catalyst for the widening debate about international legal argument and the potential for changes to the traditional paradigm of international law. Legal realists claim that international law loses its hold on practice if it seeks refuge in the rusted intentions of legal documents and treaties. To remain relevant, law must adapt to practice, and must acknowledge that rules gain their impetus and influence by co-extending with state interests. The wider scope of international legal sources and legitimate influence means that humanitarian intervention marches with international criminal tribunals and universal jurisdiction, to demand a new global ethos of civilian protection and criminal accountability.


Furthermore, Franck suggests, intentions of the UN founders reveal that they considered each UN organ Security Council, General Assembly, International Court of Justice was to be given the power to auto-determine its own competence. Unlike the hierarchical function of judicial review in national legal systems, the International Court of Justice does not have the ultimate authority over doctrinal exegesis or statutory interpretation.

There is thus no authoritative body able to determine conclusively when the Charter restrictions on the use of force may be suspended for humanitarian purposes; each case will depend on the justifications of the political organs of the UN, and on the important role played by international public opinion in determining the legitimacy of the intervention.

Strict fidelity to law in the face of humanitarian catastrophe ultimately weakens its moral claim of obedience. Click on the cover image above to read some pages of this book! But the conflict in Kosovo raised equally important questions about the consequences of action without international consensus and clear legal authority.

On the one hand, is it legitimate for a regional organization to use force without a UN mandate? On the other, is it permissible to let gross and systematic violations of human rights, with grave humanitarian consequences continue unchecked? This book is a comprehensive, integrated discussion of the dilemma' of humanitarian intervention. Written by leading analysts of international politics, ethics, and law, it seeks, among other things, to identify strategies that may, if not resolve, at least reduce the current tension between human rights and state sovereignty.

Humanitarian Intervention is an invaluable contribution to the debate on all aspects of this vital global issue. He has published on the history of international relations thought. Robert O. Keohane is James B. He is interested in the role played by governance in world politics, and in particular on how international institutions and transnational networks operate. He is a fellow of the American Academy of Arts and Sciences and has been the recipient of a Guggenheim fellowship. Advance praise: 'The papers in this volume offer an informative analysis of humanitarian intervention with real intellectual coherence.

The interdisciplinarity of the contributions, the sensitivity to the phenomenon of weak states, and the recognition of the tensions between human rights and the war on terrorism, combine to make this book both timely and welcome' Charles R. This superb set of essays provides a way to synthesize differing approaches from international law, moral philosophy and politics into a framework to deal with such complex and shattering events as Rwanda, Kosovo and the aftermath of September These original essays are an important contribution to policy clarification and to scholarship. 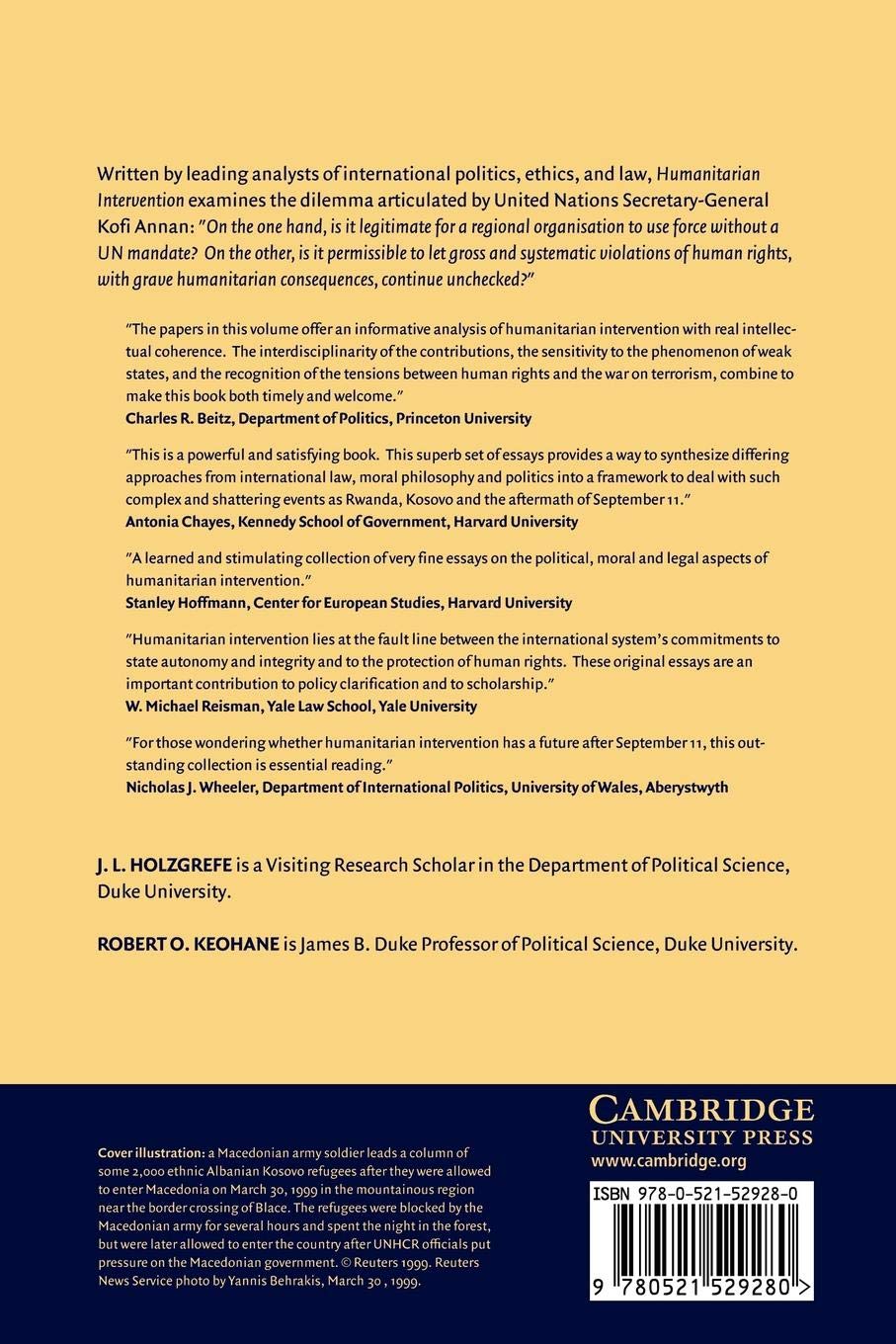 Michael Reisman, Yale Law School, Yale University 'For those wondering whether humanitarian intervention has a future after September 11, this outstanding collection is essential reading. Wheeler, Department of International Politics, University of Wales, Aberystwyth 'These essays illuminate the ethical, legal and political conditions under which humanitarian intervention can be justified, while revealing the dangers and complexities of such force.

It is an excellent book and I recommend it highly to all those interested in humanitarianism. It is an important volume that will be valuable for scholars, students, and policy-makers alike. Help Centre. My Wishlist Sign In Join. Holzgrefe Editor , Robert O. Keohane Editor. 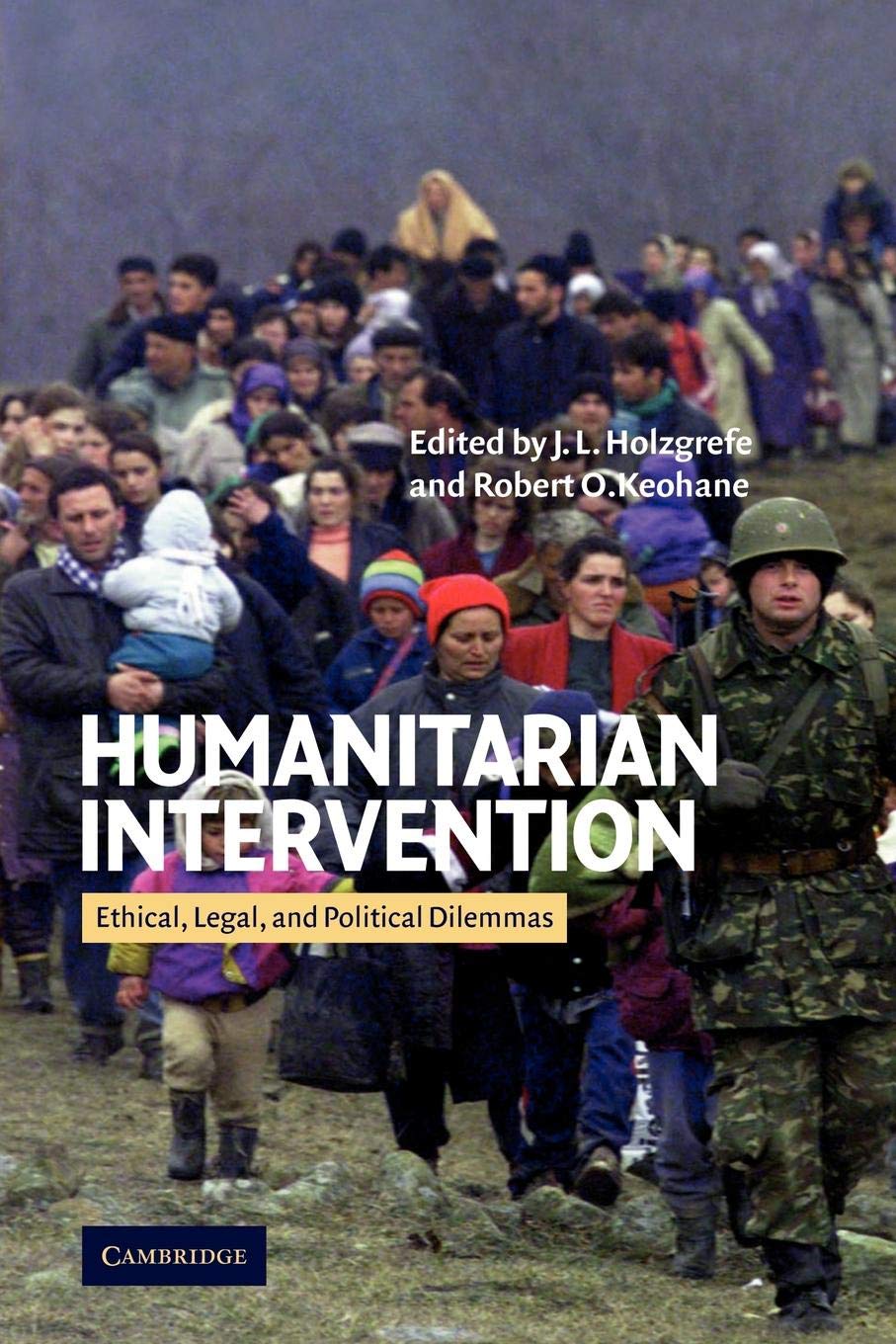 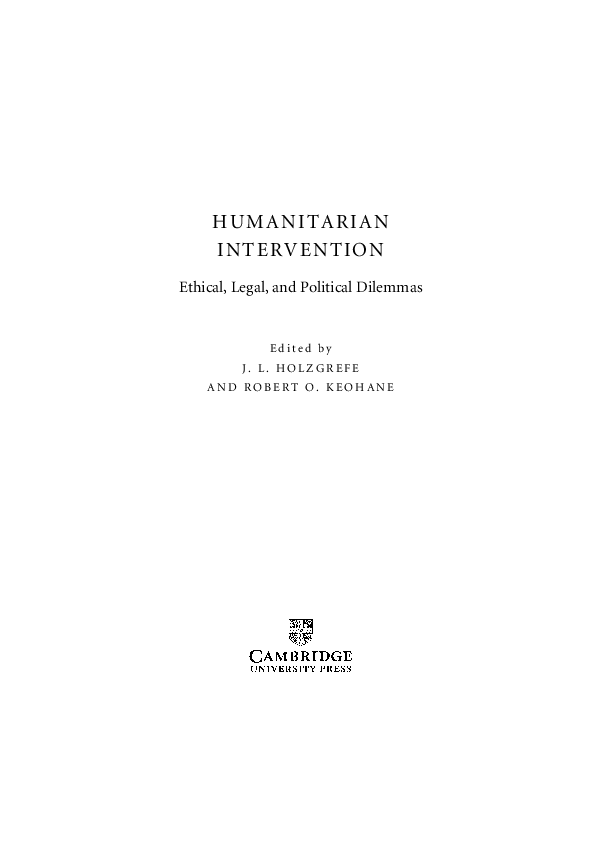 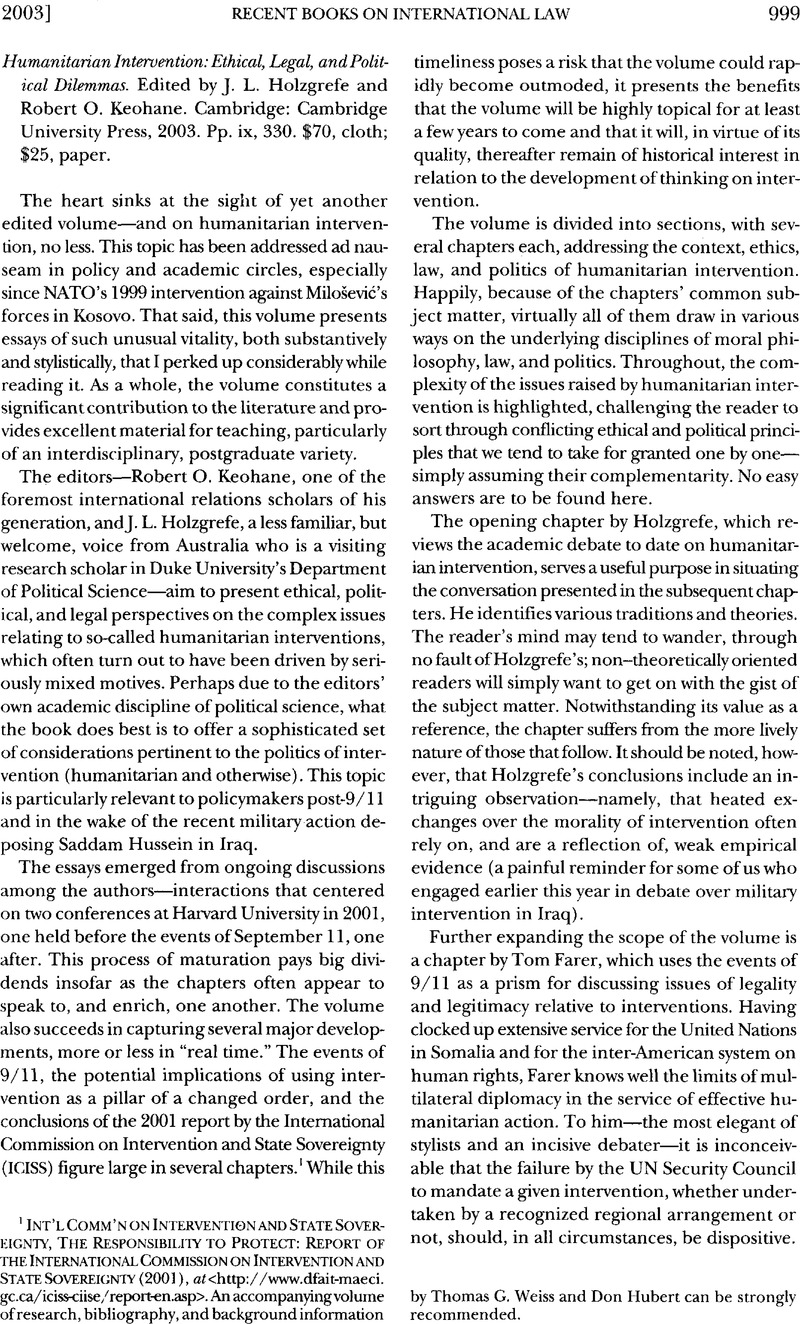